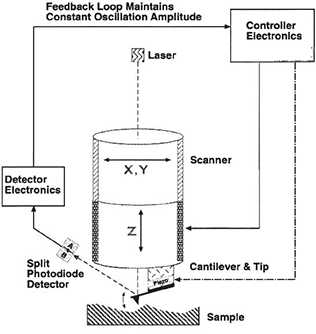 Atomic Force Microscopy (AFM) is a form of scanning probe microscopy (SPM) where a small probe is scanned across the sample to obtain information about the sample’s surface. The information gathered from the probe’s interaction with the surface can be as simple as physical topography or as diverse as measurements of the material’s physical, magnetic, or chemical properties. These data are collected as the probe is scanned in a raster pattern across the sample to form a map of the measured property relative to the X-Y position. Thus, the AFM microscopic image shows the variation in the measured property, e.g., height or magnetic domains, over the area imaged.

The AFM probe has a very sharp tip, often less than 100 Å diameter, at the end of a small cantilever beam. The probe is attached to a piezoelectric scanner tube, which scans the probe across a selected area of the sample surface. Interatomic forces between the probe tip and the sample surface cause the cantilever to deflect as the sample’s surface topography (or other properties) changes. A laser light reflected from the back of the cantilever measures the deflection of the cantilever. This information is fed back to a computer, which generates a map of topography and/or other properties of interest. Areas as large as about 100 µm square to less than 100 nm square can be imaged.

Intermittent Contact (Tapping Mode) AFM- In this mode, the probe cantilever is oscillated at or near its resonant frequency. The oscillating probe tip is then scanned at a height where it barely touches or “taps” the sample surface. The system monitors the probe position and vibrational amplitude to obtain topographical and other property information. Accurate topographical information can be obtained even for very fragile surfaces. Optimum resolution is about 50 Å lateral and 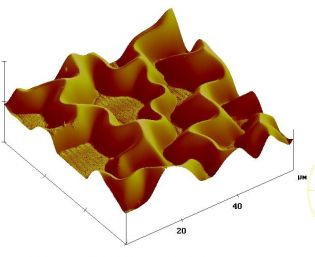 Phase Detection Microscopy - With the system operating in Tapping mode, the cantilever oscillation is damped by interaction with the sample surface. The phase lag between the drive signal and actual cantilever oscillation is monitored. Changes in the phase lag indicate variations in the surface properties, such as viscoelasticity or mechanical properties. A phase image, typically collected simultaneously with a topographical image, maps the local changes in material’s physical or mechanical properties. 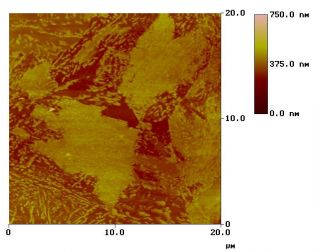 Image Analysis- Since the images are collected in digital format, a wide variety of image manipulations are available for AFM data. Quantitative topographical information, such as lateral spacing, step height, and surface roughness are readily obtained. Images can be presented as two-dimensional or three-dimensional representations in hard copy or as digital image files for electronic transfer and publication.

Nanoindentation - A specialized probe tip is forced into the sample surface to obtain a measure of the material’s mechanical properties in regions as small as a few nanometers. (See the Handbook section on Nanoindentation Hardness Testing.) 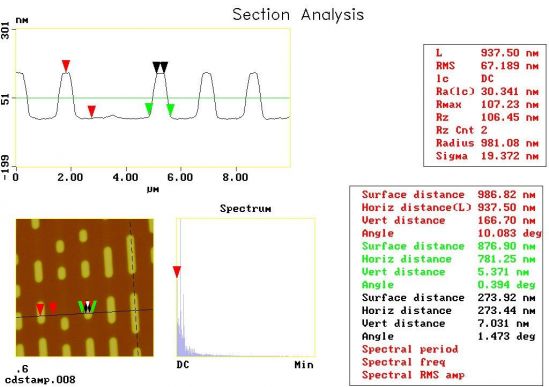 No sample preparation is typically required. Samples can be imaged in air or liquid. Sample height is limited to about 1.5 inches. Areas up to 8 inches in diameter can be fully traversed without repositioning. Larger samples can be fixtured for imaging within a limited area. Total surface roughness in the image area should not exceed about 6 µm. 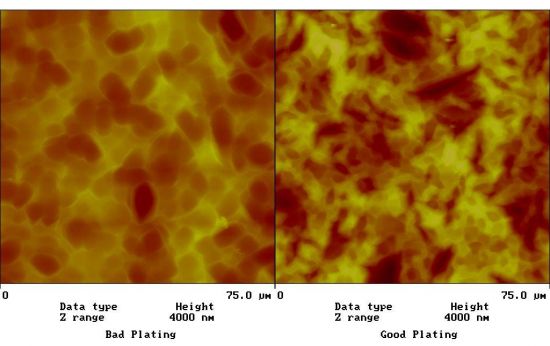