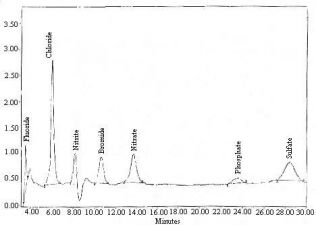 Ion chromatography (IC) is the separation and quantitative analysis of anions and cations in an ionic solution using the ion exchange method of liquid chromatography (LC). The chromatographic process separates the different ions within the sample. The amount of an anion/cation is measured by the change in conductivity as the species passes through the detector.

The ions in the sample solution are carried through the system by an ionic solution, or eluent (mobile phase). The different ions in the eluent are separated in a column packed with an ion exchange resin (stationary phase). The resin has a thin surface layer of active material with limited ion exchange sites. If anions are to be analyzed, the active sites will have a fixed positive charge to attract the anions. Resins for cation analysis will have a negative charge. Individual ions attach and detach from the resins at a rate depending on the affinity of the specific ion to the active sites. Ions with greater affinity for the stationary phase are retained in the column for a longer time than those with less affinity for the stationary phase.

Thus, the ions of particular chemical species in the solution exit or elute from the column within a narrow time band specific to that ion. The detector at the end of the column continuously measures the conductivity of the eluent to determine the quantity of the eluting ions as a function of time. The data from the detector are compiled into a plot of ion abundance versus time, referred to as a chromatogram. The position of a peak in the chromatogram is characteristic of a specific ion. The peak size is a function of the concentration for the ion represented by that peak.

Material Identification - The presence of specific anions and cations in the sample can be determined through comparison of the sample chromatograms against results for known reference materials.

Quantitation - Anion and cation concentrations can be quantified by establishing a standard curve of known concentrations for each species. The peak height or the area under the peak in the chromatogram for each anion or cation is compared to the standardization curve to determine the concentration of the ion the sample.

Sensitivity - Minimum concentration detection limits can be as low as a few parts per billion (ppb).

Samples must be immersible in a solution that is compatible with the LC system, or the components of interest must be extractable from the sample. Components must cause a change in the conductivity of the solution to be detected.