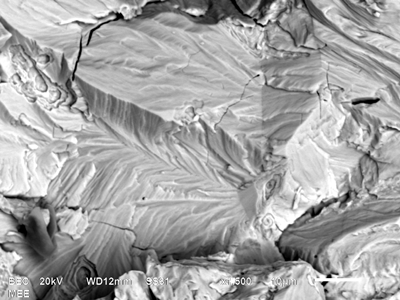 A chemical storage tank at a manufacturing facility began to leak trace quantities of the chemical from the tank into the chemical containment area surrounding the tank. The leaks were found to be due to numerous small cracks in the type 316 stainless steel shell (wall). The cracks were located about 1 in. above a weld between the shell and the floor. MEE was contacted to provide laboratory analysis and engineering consultation to determine the failure mechanism leading to the cracks and identify material or manufacturing conditions that could have contributed to the failure. Metallurgical analysis was conducted on the shell as part of the manufacturing facility’s root cause failure analysis (RCFA). 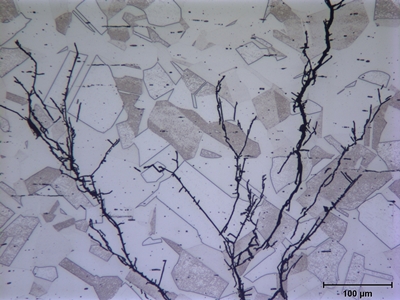 Metallographic examination of the cracks using light microscopy revealed that the cracks were transgranular and highly branched. This appearance is characteristic of chloride stress corrosion cracking (SCC) in austenitic stainless steels. The orientation of the branches also indicated that cracks originated on the outside of the tank and propagated generally perpendicular to the tank wall. Thus, the tensile stress responsible for the cracking was most likely a circumferential or hoop stress in the tank wall.

Using Energy Dispersive X-ray Spectroscopy (EDS), small concentrations of chlorine were detected in deposits on the crack surfaces, confirming the shell failure was due to chloride SCC.

For a SCC failure to occur, there must be a susceptible material in an incompatible environment under a sustained tensile stress. Chlorine, in its chloride form, is an element that is known to cause stress corrosion cracking in austenitic stainless steels, such as type 316. Chloride SCC failures occur primarily at temperatures between 60 and 100°C (140 and 212°F), which was consistent with the reported service conditions for this application.

To complete the root cause failure analysis, it was suggested that the manufacturing facility determine the source(s) of the chlorine on the outside of the tank, as eliminating the source of the chlorides would greatly reduce the likelihood for future similar failures.

The work scope for this analysis consisted of light microscopy, energy dispersive spectroscopy (EDS), and metallography (microstructure analysis). For specific details on these methods, please see the Handbook of Analytical Methods of Materials on our website or contact us for more information.