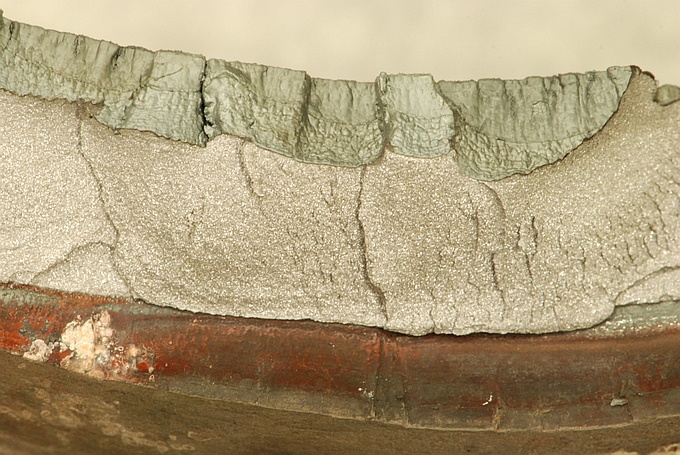 A steam line drip leg was found to be leaking during service. The drip leg is a steel pot used to collect condensate from a steam system. The expected operating conditions for the pot were 1050°F and 450 psig. After approximately 7 years in service, a cracked weld seam was discovered and repaired. Three years later, multiple cracks and a large bulge were reported in the drip leg and a failure analysis was conducted. The objectives of the evaluation were to determine the failure mechanism(s) for the pot and to identify any manufacturing, material or service conditions that could have contributed to the failure. The evaluation included visual inspection, light microscopy, scanning electron microscopy, and metallographic examination.

Multiple cracks were observed on the outer surface of the drip leg. Cracks at the ports and welds consisted primarily of a singular, isolated crack. There were multiple cracks at the bulge that had a crosshatched appearance on both surfaces.

Features on each of the crack surfaces included rachet marks and beach marks. These features are consistent with a progressive fracture mechanism with multiple origins, such as fatigue fracture. In a metallographic section, the cracks had a dagger-shaped profile, and were filled with nonmetallic scale. Some of the cracks had penetrated the entire wall thickness. The appearance of the cracking pattern, crack profile, and fracture surfaces indicated that the mechanism for the cracking was thermal fatigue in each location. 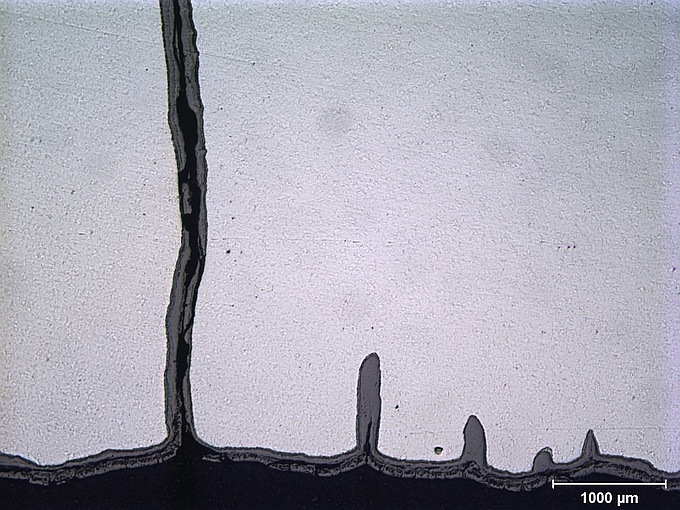 small spheroidal carbides. The elemental composition and  microstructure of the pot material were consistent with P22 alloy steel, which is commonly used in steam service. No gross manufacturing anomalies or indications of excessive temperature exposure were observed that would have contributed to the fatigue fractures.

Thermal fatigue requires cyclic stress and a corrosive environment. In this case, the normal oxidizing environment inside high-temperature steam tubes could be considered the corrosive environment. The cyclic stress was due to local fluctuations in temperature, such as a liquid intermittently cooling  the hot surface. Over time, the cracks at the welds grew sufficiently to completely penetrate the pot wall and at the bulge the cracks reduced the strength of the pot wall such that the internal pressure deformed an area of the wall material outward.

In, summary, the failure mechanism for the pot was thermal fatigue. Investigation into possible sources of cyclic stresses, particularly from intermittent condensate drip was recommended to determine the root cause of the failure.