The fire protection (i.e., sprinkler) system in a commercial building developed multiple leaks. This system was a wet fire suppression system where the distribution pipes are filled with water at all times.

A section of the pipe containing a pinhole-sized leak was removed and submitted to the laboratory for analysis. The pinhole leak was due to a localized corrosion pit from the inside. In addition to the leak site, there were numerous additional deep pits that had not penetrated through the pipe wall, but no significant uniform corrosion. The corrosion pits were covered with a relatively thick layer of nonmetallic deposits. This corrosion morphology is consistent with microbiologically-influenced corrosion (MIC). 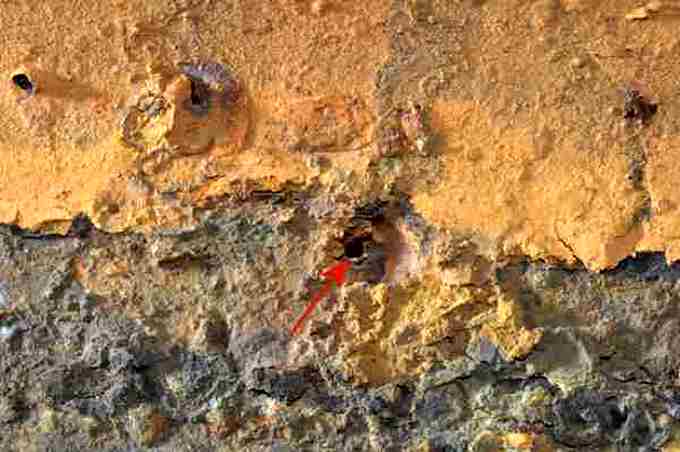 Testing of a water sample from the system for bacteria indicated high concentrations of low-nutrient (LNB) and sulfate-reducing (SRB) bacteria. Both of these organisms can contribute to corrosion of steel in stagnant water. The LNB typically form a biofilm that can exclude oxygen from local areas of the steel surface. These oxygen-starved areas become anodes where accelerated local corrosion (pitting) occurs. The SRB create a local acidic environment that can greatly accelerate corrosion. SRB often thrive in the biofilms created by LNB.

In summary, the failure mechanism for the leak was microbiologically-influenced corrosion. Low-nutrient bacteria and sulfate bacteria in the system were the likely organisms causing this corrosion. No pipe material nor pipe manufacturing anomalies were observed that would have contributed to the failure.

The work scope consisted of light microscopy, scanning electron microscopy (SEM), energy dispersive spectroscopy (EDS), and water testing, including culturing for bacteria. For specific details on these methods, please see the Handbook of Analytical Methods of Materials on our website or contact us for more information.