A 300-ft tower crane collapsed onto the intersection of two major streets in downtown San Francisco during the morning rush hour. The accident fatally injured four crew members on the crane and the driver of a bus on the street below. Twenty-two pedestrians were also injured by falling crane pieces or flying debris.

A team of safety, mechanical, and metallurgical engineers was assembled to investigate the accident. Since all of the crew members involved in the operation of the crane at the time of the accident were killed, all of the circumstances of the failure had to be reconstructed from the physical evidence and the testimony of casual witnesses on the streets and in buildings around the site.

Reconstruction of the accident was hampered by the considerable damage to the crane cab and tower sections sustained upon impact with the street after falling 300 feet. Some of the components were embedded into the ground up to 15 ft below the pavement. Fractures, twists, bends, and scrapes on the components, however, were eventually deciphered sufficiently to reconstruct the chain of events during the accident.

The crane collapsed during a climbing maneuver where the crane crew installs a new 20-ft section into the tower. To accomplish the climb, the cab of the crane is raised above the fixed tower by a hydraulic cylinder on a climbing frame to allow the next tower section to be inserted. Each climb required the hydraulic cylinder to be extended and reset several times to obtain the necessary clearance to insert a tower section. The operation at the time of the accident was for the final climb to the crane's full height of approximately 320ft.

Evaluation of the materials comprising the crane components found no evidence of substandard or defective materials. Furthermore, all of the metal fractures were due to excessive loads. No indication of progressive fractures or other pre-existing conditions were observed.

Damage to the climbing frame indicated that some rollers on the climber frame were binding excessively during the last stages of the climb. From this observation, it was suspected that the crane may not have been in a balanced position required for safe climbing. Since the crane cab is not rigidly fixed to the tower during a climbing maneuver, it is essential that the cab remains balanced and that the boom is not shifted or rotated during climbing. 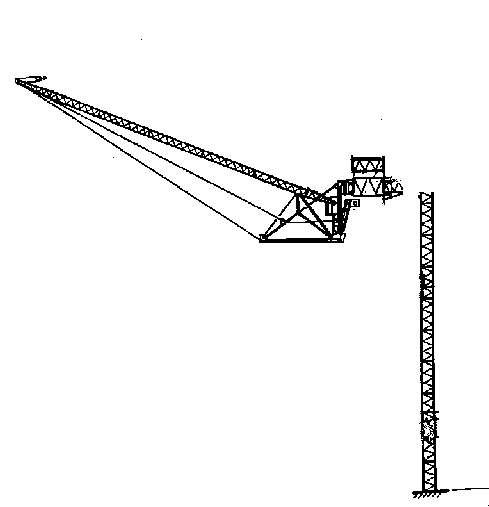 It was also noted that the hydraulic cylinders were set slightly below the level normally required for adequate clearance to insert a tower section. This observations suggested that the cab may have been tilted by shifting the boom to create the final few inches of clearance necessary to allow the tower section to be inserted without resetting the hydraulic cylinders. The evidence further indicated that the crane was rotated slightly during the climb, probably in an attempt to relieve the binding in the climbing frame rollers.

The root cause of the accident in this case was improper operation of the crane during the climbing maneuver. Additional investigation confirmed that the crew operating the crane did not have adequate qualifications, training, or procedures for safe operation of this type of equipment.