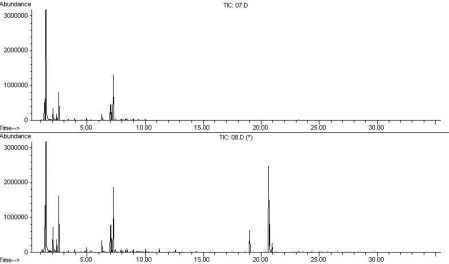 The typical GC capillary column consists of a small-diameter tube with a thin film of a high-molecular-weight polymer coated on the inside. The polymer is the stationary phase for the chromatographic process. The mobile phase can be any inert gas, but is typically helium. The instrument also includes a heated injection port to vaporize all volatile constituents of the sample and an oven to keep the constituents in gas form as they pass through the column.

The positive ions are separated according to their mass by a mass analyzer. The mass analyzer most commonly used in GC/MS is the quadrapole filter, in which the ions pass by four hyperbolic magnetic poles created by a radio frequency field. The magnetic poles separate the ions by their mass/charge ratio, successively focusing ions with increasing mass onto a detector for counting. The analyzer scans step-wise through a set range of mass values to evaluate the relative abundance of ions at each mass value. The quadrapole filter can perform a complete mass scan within the duration of a single GC elution band. 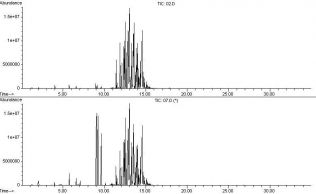 The samples for GC/MS can be gases, liquids, or solids. However, only those constituents that are gaseous and stable at the analysis temperature can be analyzed. Gases and liquids can be injected directly into the sample injector. Volatile compounds from solid materials are collected using a headspace sampler. The sample from a headspace attachment can be collected and injected at one time (static headspace), or the sample can be collected and analyzed continuously over a set time period (dynamic headspace).