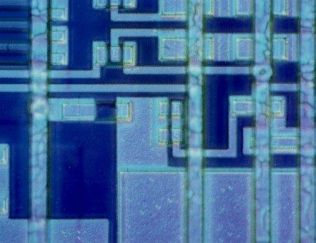 Magnification of the sample image is obtained by light refraction through a combination of objective lenses and eyepieces. The minimum feature resolution is approximately 0.2 µm. However, smaller features - as small as about 0.05 µm - can be detected by image contrast enhancement with polarized light, interference contrast, and dark field illuminations. The resulting images can be recorded either on traditional films or as digital files for computer display, analysis, and storage.

Bright Field Light Microscopy - This method produces true color images at magnifications up to approximately 2000X. The sample surface is uniformly illuminated by incident light rays directed perpendicularly to the sample surface. Light reflected back toward the objective lens is collected and focused on the eyepieces to form the observed image. Surfaces that are reflective and perpendicular to the light rays appear bright. Alternatively, nonreflective or oblique features reflect less light and appear darker. 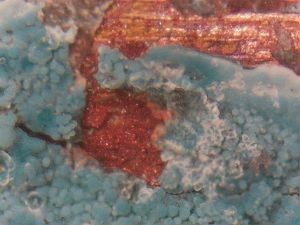 Polarized Light - This method produces enhanced contrast for features that have anisotropic refractive properties. Two polarizing lenses are inserted into the optical path - one in the incoming illumination and one between the sample and eyepieces. When these lenses are rotated 90° to one another, the “crossed polarizers” result in the subtraction of a portion of the light spectrum by destructive interference. Contrast is obtained between sample features that have different reflective properties. Many metals, including beryllium, zirconium and titanium, are anisotropic and exhibit grain contrast with polarized light illumination. Polarized light enhances contrast for many polymer samples and shows variations of internal stress in some clear polymers.

Differential Interference Contrast after Nomarski (DIC) - This method produces a 3-dimensional image by creating brightness contrast on very minor topographical changes. DIC utilizes crossed polarizers as described for polarized light. A double quartz prism is also inserted into the light path to split the incident light into two separate paths. This results in two slightly shifted images of the sample on the viewing plane, which produces contrast between features with different heights and topographic orientations. The analyzer can be adjusted to obtain various degrees of interference to enhance selected features or create contrast colors in the image.

Darkfield - Enhanced contrast from subtle topographic features is produced with this method. An occluding disk is placed in the light path, blocking the direct vertical illumination. Peripheral rays in the illumination are reflected in such a way that light reaches the sample at oblique angles. The absence of incident vertical rays results in bright reflectance only from oblique features, such as ridges, pits, scratches and particles. Thus, subtle features that might be completely invisible in bright field microscopy are readily observed with this method.

Quantitation - Microscope magnification is calibrated against reference standards. Lateral feature dimensions can be measured to an accuracy greater than 0.5 µm. Computer analysis of digitally-acquired images can measure area and volume fractions, particle sizes, grain size, and other features.

Sample size, shape, and condition requirements depend on the configuration of the microscope. Low-magnification stereo microscopes are small and have a long focal length (up to 5 in.), so these can be set up to examine even relatively large samples. Some portable field microscopes can be fixtured directly to large structures. For magnifications of 100X and above, microscopes are not usually amenable to portable use (except specialized field units). Samples for typical high-resolution light microscopes are limited to a few pounds in weight, and examination is limited to readily accessible flat surfaces due to the small depth of field at higher magnifications.