Brinell hardness testing was one of the earliest techniques developed for measuring the hardness of metal. The test is a two-step process. First, an impression is made on the surface of the test piece using a 10-mm diameter spherical (ball-shaped) indenter at a set load. The average diameter of the impression is then measured under low magnification, typically about 20X. The Brinell hardness number is calculated by dividing the test force (kgf) by the surface area of the impression (mm2). A range of indenter size and loading combinations can be used, allowing both soft and hard materials to be tested using a single method. Brinell hardness numbers can be used to correlate to tensile strength for some metals and alloys, and standardized conversions are available for translating results to other hardness scales.

Of the common indentation hardness testing techniques, Brinell testing produces the largest impression on the test specimen, typically 2 - 6 mm in diameter. The large impression is beneficial for materials with inhomogeneous or coarse-grained microstructures, such as castings, because any local variation in the microstructure is averaged by the large test area. However, the large indentation requires a large test specimen, which limits the types of samples that can be tested.

Originally, indenters were made from steel ball bearings. To accommodate testing of harder materials without risk of damage or deformation to the ball with repeated use, a tungsten carbide ball became the standard indenter. For clarity, HBS or HBW are often listed after the numeric hardness value to indicate that measurements were made using a steel indenter or tungsten carbide indenter, respectively. 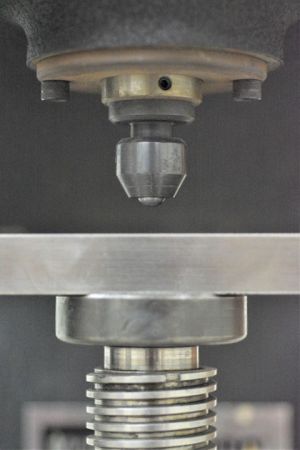 To provide accurate and repeatable results, testing methods should be governed by a recognized standardized procedure. Brinell hardness testing standards include ASTM E10 and ISO 6506-1.


For expressing Brinell hardness test results, the designation HB, without any additional information, indicates that a 10-mm tungsten carbide ball was used with a 3000-kgf test force and 10 - 15 second dwell time. If alternate conditions are used for testing, the test parameter should specified behind the reported hardness value. For example, a hardness designation of “300 HBW 5/250/20” indicates that a hardness value of 300 was obtained in a test using a 5-mm tungsten carbide indenter, a 250-kgf test force, and a 20-second dwell time.


Literature hardness references are also often in Brinell, so direct testing on the Brinell scale is beneficial for comparison to literature values.

An ideal specimen for Brinell testing would be at least 1 in. square with and flat and parallel faces, although measurements can also be made on curved surfaces. Irregularly-shaped samples will may need to be cut to accommodate testing.

Portable Brinell hardness testing can also be performed on large samples where laboratory testing is impractical or test specimens cannot be cut from a larger item.