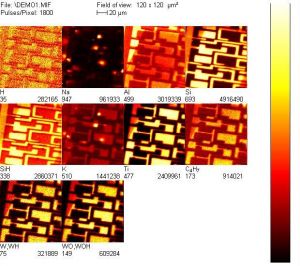 All elements, including hydrogen, are detectable by SIMS. In ToF-SIMS analysis, the sample is placed in an ultrahigh vacuum environment where primary ions bombard the sample and sputter atoms, molecules, and molecular fragments from the sample surface. The mass of the ejected particles (i.e., secondary ions) are analyzed via time-of-flight mass spectrometry.

In the ToF analyzer, ejected ions are accelerated into the analyzer with a common energy, but at different velocities depending on the particle mass. Due to the differences in these velocities, smaller ions move through the analyzer faster than the larger ions. The mass of the secondary ions are determined by their travel time through the analyzer. SIMS is a surface-sensitive analysis method, since only the secondary ions generated in the outermost 10 to 20 Å region of a sample surface can overcome the surface binding energy and escape the sample surface for detection and analysis.

Mass Spectrum - SIMS analysis identifies the elemental and ion composition of the uppermost 10 to 20 Å of the analyzed surface from positive and negative mass spectra. The high resolution of the ToF analyzer can distinguish species whose masses differ by only a few millimass units.

Depth Profile - During SIMS analysis, the sample surface is slowly sputtered away. Continuous analysis obtains composition information as a function of depth. Depth resolution of a few angstroms is possible. High-sensitivity mass spectra can be recorded or reconstructed at any depth of the profile.

Secondary Ion Mapping - A SIMS map measures the lateral distribution of elements and molecules on the sample’s surface. To obtain a SIMS map, a highly focused primary ion beam is scanned in a raster pattern across the sample surface, and the secondary ions are analyzed at specific points on a grid pattern over the selected surface area. Image brightness at each point is a function of the relative concentration of the mapped element or molecule. Lateral resolution is less than 100 nm for elements and about 0.5 µm for large molecules.