A metallurgical evaluation was requested to investigate the failure of a plug from a pressure reducing valve in a high-rise building. The valve was for the potable water system, and water was supplied from a municipal water system. Significant property damage resulted when the plug became dislodged from the valve body and released a high-pressure stream of water from the opening. The water jet created a hole in the adjacent wall, sending copious amounts of water into the adjacent room. 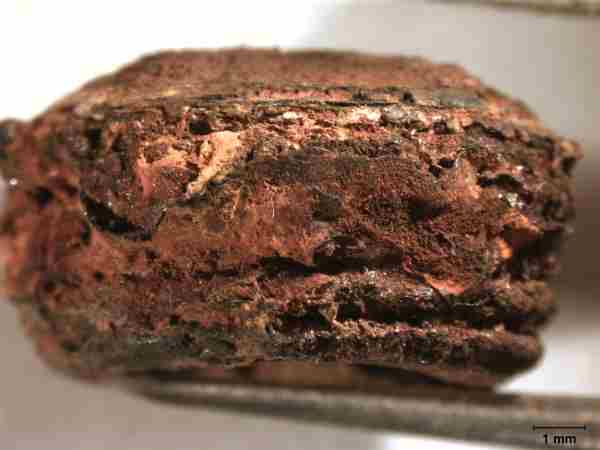 The failed plug was externally threaded with a recessed hexagonal socket. As found on the floor after the incident, the plug surface was coated with red-brown corrosion products and had sustained substantial material loss at the thread surfaces. The results of energy dispersive x-ray spectroscopy (EDS) analysis for the plug were characteristic of a steel plug covered with primarily iron oxide corrosion products. Analysis of filings from the valve body indicated that the valve body was a leaded bronze casting alloy, which was consistent with the specification from the valve manufacturer. No significant damage or corrosion of the threads in the valve body were observed.

The severe corrosion of the steel plug and the relatively unaffected threads in the bronze valve body were characteristic of a galvanic corrosion mechanism. An electrochemical difference between these two metals in the presence of an electrolyte (municipal water supply) created a galvanic cell, which resulted in preferential corrosion of the steel plug while protecting the bronze valve body. Testing of the water and evidence from other installations within the building indicated that the amount of corrosion for the steel plug would not have occurred without the contribution from the galvanic coupling.

The corrosion of the steel plug gradually reduced the load-bearing area of the plug threads over time. Eventually, the strength of the threaded connection was no longer sufficient to withstand the internal water pressure in the valve, and the water forced the plug out of the valve body, flooding the surrounding area.

In summary, the failure mechanism for the pressure-reducing valve was galvanic corrosion of the steel plug. Brass plugs, which have a similar galvanic potential to bronze, would have provided reliable service in this application. In fact, brass plugs were installed in place of the steel plugs and have been operating without incident since the investigation.