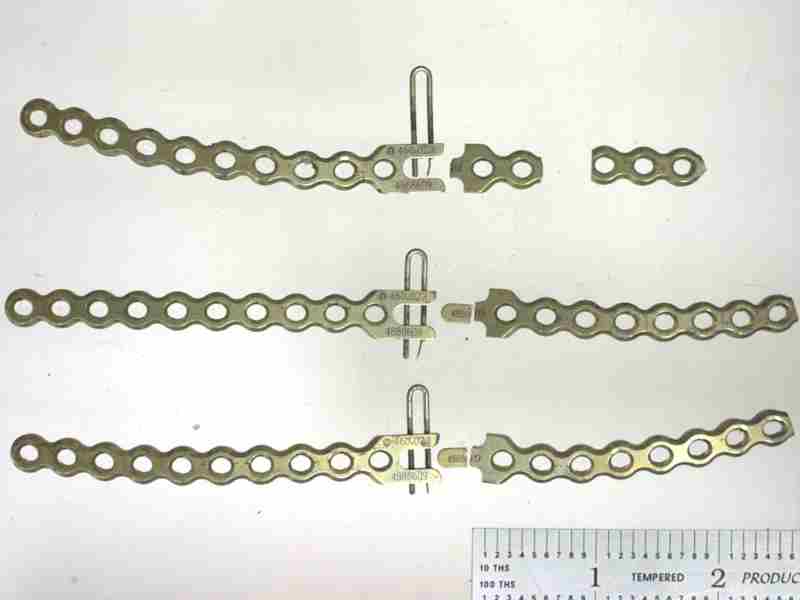 A metallurgical evaluation was requested to investigate the fracture of three titanium sternal plates that had failed in vivo after a shorter than expected service life. The plate material was wrought unalloyed titanium. The objective of the analysis was to determine the fracture mechanism for the plates and identify material or manufacturing conditions that may have contributed to the failures. This analysis was limited to non-destructive methods including light and scanning electron microscopy (SEM).

The titanium plates had fractured though a drilled hole in the tab portion of the device where the two principal components of the device were connected by a pin. The fracture on both sides of the pin hole were generally on a transverse plane and occurred without significant plastic deformation. Faint radial ridge patterns on the fracture surfaces indicated fracture initiation on the inside surface of the drilled hole for each of the fracture surfaces. Beach marks and radial ridges observed near the inside surface of the hole indicated multiple initiation sites at this surface.

The microscopic features for each of the fracture surfaces had a complex morphology with areas of fluted texture, cleavage facets, and smoother patches with distinct fatigue striations. No significant indications of a final fracture regions were observed. Thus, the fracture morphology indicated a high-cycle fatigue fracture mechanism from relatively low maximum nominal stresses. 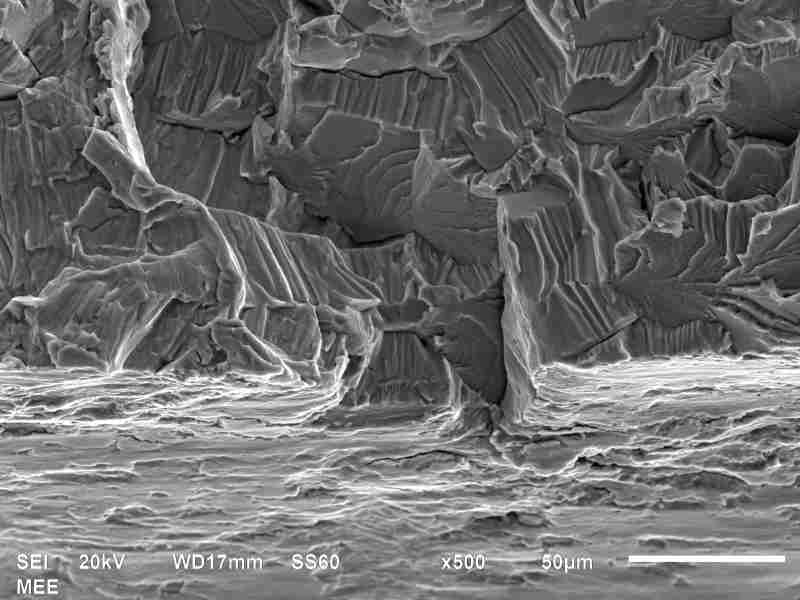 The inside surfaces of the drilled holes had a slightly rough texture with a distinct pattern of generally circumferential grooves. This surface texture was characteristic of metal that had been smeared by rough machining. The smearing on the surface of the drilled holes would have created a cold-worked layer of metal that would have a lower resistance to fatigue fracture initiation than the undeformed bulk material.

However, the patient in this case presented slow healing of the sternum, which delayed bone union beyond that typically expected for this procedure. This complication resulted in a higher number of stress cycles at higher stress levels that if faster healing had occurred.

In summary, the failure mechanism for the sternal implants was high-cycle fatigue fracture. Rough machining of pin holes created a material condition that was susceptible to fatigue fracture initiation, but slow healing of the patient's sternum extended the high-stress period for the device.

Fatigue fracture requires a source of cyclic tensile stress above the endurance limit of the material, and in implantable devices, cyclic stresses are practically unavoidable. For devices that provide fixation to aid healing bones, the life expectancy of the device is often a race between bone healing and fatigue fracture. Thus, eliminating factors that decrease this endurance limit is essential to reduce the risk of critical component failures.